After 1945, the picture of World War II around the Baltic rim seemed to be clear on the surface: there were perpetrators, first of all, German Nazis, there were some collaborators (such as Quisling in Norway), there were victims (Jews, the occupied nations such as Poles, the Soviet people, Danes) and, of course, heroes – the allied forces and the Red Army in particular, and also the various resistance fighters and partisans and also some diplomats. And then there were neutral countries which simply observed the events on the battlefields.


However, facts and discussions were never as simple and straightforward as they were presented, particularly in the socialist countries. In those nations that came under Soviet rule during and after the World War II, there was a private commemoration of Soviet crimes from early on. On a larger scale, collective commemoration changed from the mid-1980s. West Germany debated about liberation instead of defeat, and Poles discussed whether they were bystanders of the Holocaust. A new dynamic unfolded a decade later, after the collapse of the Soviet system. Now, the issue of supporting Nazi and Soviet crimes also arrived in Sweden. Sweden had not only supplied Nazi Germany with steel, but even allowed German troops to use the Swedish railway system. When the Baltic States were occupied, Sweden quickly accepted the new situation, and after the war, Baltic soldiers were extradited to the Soviet Union (see Swedish Prime Minister Reinfeldt’s statements in the chapter “May 1945: Liberation or Occupation?” below).


As a result, a broad discussion of the Holocaust emerged that no longer followed the former cleavages of the Cold War. Poland was shocked by the rediscovery of the murder of the Jewish neighbours in Jedwabne and in the vicinity. In Lithuania and Latvia, collaboration of policemen with German occupation forces was discussed, as it also has been recently in Norway after the publication of new research by Marte Michelet in 2014. In Estonia and Latvia, the role of the SS-legions was scrutinized. These debates, which were supported by expert commissions, however, also stimulated national reactions, claiming that the majority of one’s own nation were victims of Nazi rule as well and should not be seen as collaborators. In Estonia, the controversy led to the monumental conflict connected to Bronze Soldier. Today, these issues are addressed in various museums. The most ambitious project, the Museum of the Second World War in Gdańsk, which tried to develop a holistic and transnational perspective, however, was torpedoed by the nationalist Polish government even before it opened in 2017. Further controversies concern old and new monuments. Generally speaking, the recent debates show that the main question of how to commemorate World War II 80 years after its beginning is an issue not of individual national debates, but of all nations around the Baltic rim.


In 2000, Polish society was shocked by Jan Tomasz Gross’ book Neighbors about the murder of more than 300 Jews in the town of Jedwabne in July 1941 by the Christian neighbours. The debates continue today, and also the conflict concerning the Museum of the Second World War in Gdańsk has to be seen as a consequence of this debate, because conservative and nationalist groups within the Polish society do not agree with Gross’ argument. Here are two sources from this debate:

One day, in July 1941, half of the population of a small East European town murdered the other half – some 1,600 men, women, and children. Consequently, in what follows, I will discuss the Jedwabne murders in the context of numerous themes invoked by the phrase ‘Polish-Jewish relations during the Second World War.’
First and foremost, I consider this volume a challenge to standard historiography of the Second World War, which posits that there are two separate wartime histories – one pertaining to the Jews and the other to all the other citizens of a given European country subjected to Nazi rule. This is a particularly untenable position with respect to Poland’s history of those years, given the size of, and social space occupied by, Polish Jewry. On the eve of the war, Poland’s was the second largest agglomeration of Jews in the world, after the American Jewry. About 10 percent of prewar Polish citizens identiﬁed themselves – either by Mosaic faith or by declaring Yiddish to be their mother tongue – as Jews. Nearly one-third of the Polish urban population was Jewish. :And yet the Holocaust of Polish Jews has been bracketed by historians as a distinct, separate subject that only tangentially affects the rest of Polish society. Conventional wisdom maintains that only ‘socially marginal’ individuals in Polish society—the so-called szmalcownicy, or ‘scum,’ who blackmailed Jews, and the heroes who lent them a helping hand—were involved with the Jews. […]
The second point that readers of this volume must keep in mind is that Polish-Jewish relations during the war are conceived in a standard analysis as mediated by outside forces – the Nazis and the Soviets. This, of course, is correct as far as it goes. The Nazis and the Soviets were indeed calling the shots in the Polish territories they occupied during the war. But one should not deny the reality of autonomous dynamics in the relationships between Poles and Jews within the constraints imposed by the occupiers. There were things people could have done at the time and refrained from doing; and there were things they did not have to do but nevertheless did. Accordingly, I will be particularly careful to identify who did what in the town of Jedwabne on July 10, 1941, and at whose behest.
In August 1939, as is well known, Hitler and Stalin concluded a pact of nonaggression. Its secret clauses demarcated the boundaries of inﬂuence spheres between the two dictators in Central Europe. One month later, the territory of Poland was carved up between the Third Reich and the USSR. The town of Jedwabne ﬁrst found itself in the Soviet zone of occupation and later, after Hitler attacked the Soviet Union, was taken over by the Nazis. An important issue I thus felt compelled to address concerns the standard historiographical perspective on Soviet-Jewish relations during the twenty-month-long Soviet rule over the half of Poland the Red Army occupied starting in September 1939. Again this is not the place to put the matter to rest. We will simply have to remember that according to the current stereotype Jews enjoyed a privileged relationship with the Soviet occupiers. Allegedly the Jews collaborated with the Soviets at the expense of the Poles, and therefore an outburst of brutal Polish antisemitism, at the time the Nazis invaded the USSR, may have come in the territories liberated from under Bolshevik rule in 1941 as a response to this experience. I therefore explore whether there were any linkages between what happened in Jedwabne under the Soviet occupation (September 1939–June 1941) and immediately thereafter.
The Jedwabne massacre touches upon yet another historiographical topos concerning this epoch – one maintaining that Jews and communism were bound by a mutually beneﬁcial relationship. Hence, allegedly, the presence of antisemitism among broad strata of Polish society (or any other East European society, for that matter) after the war, and the special role Jews played in establishing and consolidating Stalinism in Eastern Europe.

- Jan Tomasz Gross, from the Introduction to Neighbors, 2001.

The discussion about victims, bystanders and perpetrators, however, has not been limited to Poland. In Estonia, it was spurred by a private monument commemorating Estonian members of the SS Legion during the World War II. After controversial debates, it was removed from a cemetery in Lihula to a private museum location in Lagedi near Tallinn in 2005. The Estonian inscription says: "To the Estonian men, who fought in 1940-1945 against Bolshevism and in the name of the return of Estonian independence". Both inside and outside of Latvia, controversy and tension continue to surround the Latvian Legion, a formation of the German Waffen-SS during World War II. Some people who joined the Legion were motivated mainly by strong anti-Soviet feelings, some were simply forced to join, some had anti-Semitic views and were Holocaust collaborators. A remembrance day of the Latvian legionnaires is celebrated on 16th of March. Now that most of legionnaires are dead, their history is exploited by Latvian and Russian politicians to mobilise their potential target audiences (keeping in mind that voters in Latvia still vote mainly on an ethnic basis for ‘Latvian’ and “Russian’ parties). 16th of March, a day of remembrance dedicated to the Latvian legionnaires (for couple of years it was an official memorial day, but in 2000 was removed from the list of national days of remembrance) is used by different groups for demonstrations - to oppose or to glorify Legionnaires and to use their stories to promote their own political agendas. 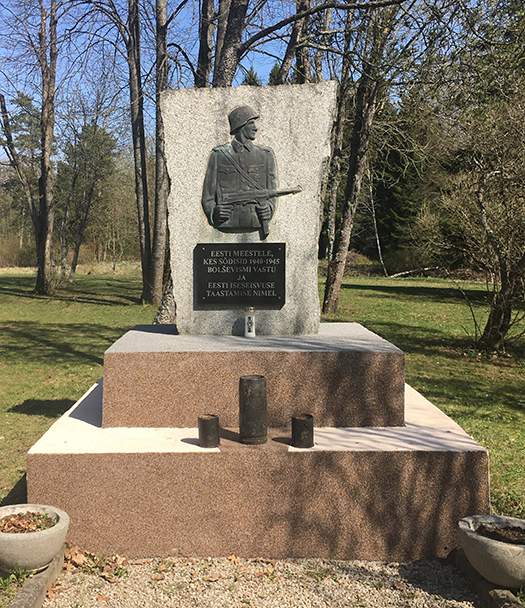