During the 13th century, the countries on the eastern coast of the Baltic Sea were profoundly transformed. Crusaders from the West conquered and converted many of the local tribes and established new medieval polities, now known as Livonia and Prussia. Whereas Prussia became largely Germanised in later centuries, the German settlers in Livonia remained a minority, and the local ethnic groups retained their identities, while the groups grew in strength during the second half of the 19th century to become modern nation states.


Our view of the Crusades in the Baltic region is dependent on a number of circumstances. Reading medieval chronicles written by the crusaders can result in diametrically opposed interpretations depending on the view of the reader. The Baltic German nobility saw the crusaders as their ancestors, and while they did not try to glorify them, they did at least try to understand and justify the conquerors’ actions. Criticism of the Crusades began during Enlightenment when it was linked to the rejection of the ancien régime. From the Estonian and Latvian point of view, the identification with these pagan tribes is a vital part of their understanding of the past, thus the same war (the Baltic Crusades) is also called the fight for freedom in Estonian and Latvian historiography.


Although the crusades to Finland had a more modest scope, the resistance of the locals towards the conquering westerners also has its place in Finnish historiography. Lalli, the Finn who killed Bishop Henry of Uppsala, has been treated as a national hero, whereas Henry became a Catholic saint due to his martyrdom – the patron saint of Finland.


The German and Polish perceptions of the Teutonic Order and its territory in Prussia was shaped by the national conflict of the 19th and 20th century. Controversies included the issues of whether the Order forged documents in the early 13th century in order to claim rights to the Prussian territory, and whether the Order brought civilisation to the region or conquered it by violence. Finally, the victory of the Polish-Lithuanian army over the army of the Teutonic Order at Tannenberg / Grunwald / Žalgiris in 1410 was the subject of various national commemorations between the late 19th century (painting by Jan Matejko), World War I (German victory at Tannenberg), and post World War II (movie Krzyżacy - in English: Black Cross - by A. Ford, 1960).


Questions of the more or less forced Europeanization of the Baltic Sea Region were examined anew in the multinational Culture Clash or Compromise project, which was led by Professor Nils Blomkvist at the then Gotland University College (now Uppsala University, Campus Gotland) from 1996 to 2009. This project, conceived in the wake of the new political situation in the Baltic Sea Region, resulted in a number of publications and created research networks that are to some extent still in place.


Ludwig von Maydell (1795–1446) was one of the most important artists of Baltic Romanticism. He was born into a large Baltic-German family and studied art in Berlin, Dresden, Stuttgart and Rome. Returning to Tartu, he founded the first xylographic workshop in the Russian Empire. His interest in history led to a very influential series of pictures on the Livonian Middle Ages.

Before we permit the chronicler to begin narrating, we would like to use this opportunity to remove any doubt and misunderstanding still held by philanthropists by asking this question: “What right did these outsiders have to settle here and to meddle in the affairs of the indigenous population?”, intent on forcing their unjust rule. There is only one answer to this: that The Culture not only has the right but also the duty to fight and defeat barbarism because this kind of crime degrades mankind and shames God. The way this is done will depend on the purity of the Culture or the measure of barbarism it still contains, something we must not judge ourselves, because it will be dealt in the Final Judgement, just as we ourselves have to give answer then. We, as well as Europe and the whole World still educate itself, and therefore can we not prescribe from our present-day point of view what should have happened 600 years ago. It would be much better to try to observe sine ira et studio, what really happened and try to comprehend why it had to happen, in order to learn something useful for today when we do not know what the future will bring. 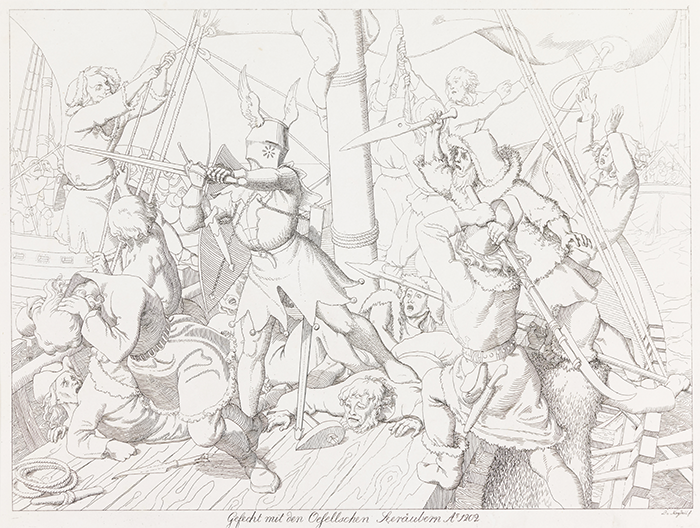 Garlieb Helwig Merkel (1769–1850), the son of a Livonian pastor, was a private tutor, secretary, writer and publisher. He is particularly well-known for his critical works of serfdom in the Baltic provinces. The spirit of the Enlightenment enabled him to see the Baltic people as they once lived, in what was the most golden age of their land before their conquest and Christianisation.

On the Teutonic knight Goswin von Aschenberg, who killed the envoys of the Bishop in 1428, Merkel wrote: “In this one little perfect example, one has the full canvas of the spirit of the Knights, [ ... ]. The pride of its status, cruelty and brazen shamelessness without fear of punishment were always pillars of this society. If one wishes, one can replace these characteristics with the words self-esteem, strength and manly honesty: the meaning will still remain the same.

Astaf von Transehe-Roseneck (1865–1946) was a Livonian fief holder and Baltic nobleman in Berlin in 1918. After the land reform and abolition of the Estates, he left the country and settled in Mecklenburg. Being a historian, his main works focus on the legal history of the Baltic countries and on the genealogy of the Baltic nobility.

Consider his position and his life: far from home in an unfriendly and inhospitable country, always having to bear arms and be in the saddle, constantly surrounded by danger, threatened by external enemies, on constant guard against the treacherous locals with no help in sight and having to rely solely on his wits and his own strength and determination. Blood and iron – what a tough way of life! We are thus not surprised that this stubborn nobleman did not yield to any foe. Men of action, which is just what the Livonian vassals were, they did not think much of the abstract powers of the Emperor and Pope. The following words are typical of a Livonian knight during the first quarter of 15th century. Dietrich von Vietinghoff said these face to face with Bishop Caspar of Oesel: ‘The whole country has been conquered without the Pope and Emperor about whom there is not much to say in this country.’

Hans Kruus (1891–1976) is regarded as the founder of Estonian historiography as an academic discipline. He was chief editor of the multi-volume History of Estonia published during the 1930s. Being politically left wing throughout his life, he joined the Communist Party in 1940 and spent most of the Second World War behind the Russian Front. After the war, he was one of the victims of Stalinist repression.

The suppression of the Estonians by a foreign power was for centuries a decisive factor in determining the fate of this people. The very essence of its national individuality, developing rapidly towards the end of its period of independence, was severed when the country lost its independence. From being a people developing under favourable conditions, the Estonians became an object ruled by a foreign force, a body oppressed and dominated. Out of this subjected mass there could not rise the circles who could foster national culture. Under such conditions, the cultural fabric of the Estonians now with a sharply-defined democratic character, as proved by the archaeological excavations, was not stimulated by any foreign ideas. The new order of the ruling class could not offer any, as it lived apart from the Estonian people. During this transition from independence to servitude, the country lost its creativity and the opportunity to be vibrant. The national culture of the Estonians was paralysed for centuries until the second half of the 19th century when, during the period of national renaissance, there was a renewed upsurge of self-determination.

The first German occupation, which severely affected our country for centuries, took place during the 13th century and did not end until after a long violent and desperate fight by our forefathers for our country’s freedom. This struggle exposed in full the cruelty of the German invaders. Driven by their greed, desire and wild plans to plunder, conquer and enslave the free Estonian people and to extend this rule in Eastern Europe, later known as the notorious German ‘Drang nach Osten’, these German knights, brutes on horseback, began to rob and ravage Estonia with fire and sword. This bloody pillage and the attempt to enslave the Estonians was met with considerable resistance by the freedom-loving Estonian people. After a ferocious, fluctuating war lasting twenty years, the Germans finally succeeded in breaking the resolute and heroic Estonians’ resistance.

Heinrich von Treitschke’s essay was first published in German as “Das Deutsche Ordensland Preußen” in 1862 and marked a significant turn towards a German nationalism claiming hegemony over the territories that once formed the state of the Teutonic Order with a clear negative attitude toward the “easy-going” Slavonic nations. The text stimulated Polish counter-narratives of the treacherous and cruel behaviour of the Teutonic knights.

Thus was the valley of the Vistula brought into the general movement of history, and thus was the New Germany founded – a land which, though in political and military union with the rest of Germany, was strongly averse to conquests beside the Gulf of Riga into which the Western Dvina pours its waters. Let us briefly summarise the characteristics of the colonization of Old Prussia and of what are now the Baltic provinces of Russia, respectively, for they alone explain the wide difference between their subsequent history. Prussia was Germanised, but in Courland, Livonia, and Estonia, there was no more than a thin stratum of German elements superimposed upon the masses of aboriginal inhabitants. By sea the Germans arrived in small numbers, to find a mixed population of Lithuanians and Finns, who paid rent to the princes of Polotsk. The immigrants took the place of these foreign magnates, assigning the land to the Order, the Church, a few crusaders, and the patriciates of the scanty towns. Thus from the first this implantation had a one-sided aristocratic nature. There was but little trace of a German peasantry, and less and less the farther east one went. A burgher life properly so-called developed only in Riga, Dorpat, and Reval; the other towns retained a purely rural character, being quiet places; and in the whole of Courland there was not a single city of outstanding importance.
The west was more favourably situated in another notable respect. Old Prussia was colonised by Germany at large. Its towns were settlements of easterners, and therefore (as throughout the regions strongly influenced by the Hanseatic League) the municipal books were kept and business letters were written in Low German, the silver currency of Northern Europe was in circulation, trade was sedulously restricted to the northern regions which had been occupied by the Low Germans, and the whole trend of civic life was both bolder and rougher than in High German towns […].

Richard Sagrits (1910–1968), Estonian painter who was educated in the art schools of Tallinn and Tartu. During the second World War he was behind the front in Russia, where Estonian artists gathered in Yaroslavl. Sagrits is mostly esteemed for his landscapes, but during the war and after, he has painted also a series of depictions of ancient and medieval Estonian history. 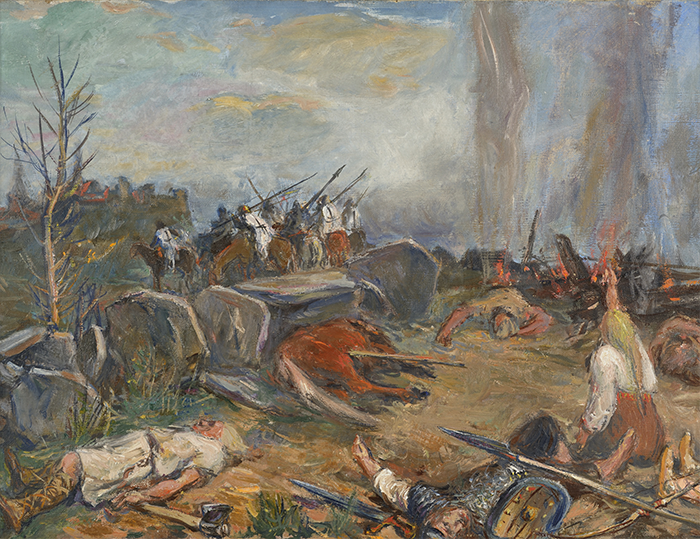 Bernhard Borchert (1862–1945) was born in Riga. He studied art in St Petersburg, On returning to Riga, he became a painter, illustrator and teacher. In 1919, he left Latvia and settled in Berlin. 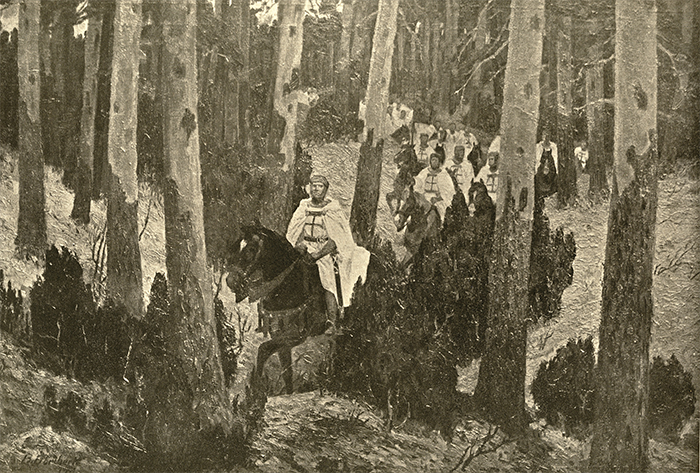