Toompea Hill in Tallinn has always been the location of the state power in Estonia. It had already been fortified by the Estonians, but when the Danish crusaders came in 1219, they erected a new stone castle. During the reign of the Teutonic Order in the Middle Ages, the castle was expanded and the major tower, the long Herrmann built. In the 18th century, the medieval castle was redesigned to house a governor of the province, subjected to the Russian Czars. In 1920-1922 the Parliament building of Estonian Republic was inserted into the medieval castle. All these episodes have left powerful symbols on the Hill. Among these the Nevsky Cathedral just next to the castle is the most controversial.


The government of the Russian Empire in the late 19th and early 20th centuries founded several great cathedrals in honour of Prince Alexander Nevsky in the provinces of the empire. Such temples were built in Warsaw and in Helsinki, for example. The building in Tallinn is from this series.


The idea of the building originates from the governor Sergei Wladimirowich Shakhovskoy. The architect Mikhaïl Preobrajensky insisted, that the castle hill dominating the whole town is the most suitable place for the church, to demonstrate the Russian rule over the provinces. Also the choice of the patron saint Alexander Nevsky is not accidental. This 13th century ruler of Novgorod defeated Swedish troops on the Neva and, in 1242, the army of the Dorpat episcopacy and Teutonic Order on Peipus, and was highly regarded as the protector of Russia against the western Catholic intruders. The church was built in 1894-1900 in the so-called “Russian style’, based on the models of 17th century Moscow and Jaroslavl architecture. It was devoted to the memory of the miraculous rescue of Emperor Alexander III in a train accident on October 17th, 1888.


After the collapse of the Russian empire, there was an obvious urge to get rid of this kind of symbols everywhere. The Orthodox church built in Warsaw in a similar vein was demolished, in Helsinki/Suomenlinna the Orthodox church of the imperial garrison was turned into a Lutheran church. In Tallinn, different plans were devised, but there were other priorities: Moreover, there was also a considerable Orthodox minority in Estonia to protect the church. Soviet authorities planned to turn the cathedral into a planetarium (in the 1960s), but the temple was saved. The main role in in its rescue was played by the young bishop of Tallinn and Estonia Alexy (Ridiger), a future Patriarch of Moscow and All Russia Alexy II (1990-2008). In 1995, the cathedral was listed on the Estonian National Register of Cultural Monuments.


Today the church is no longer endangered, but there are still differing perspectives. In the townscape of the medieval Hanseatic town, it is an intruder. For a cruise tourist, it is an attractive exotic piece of architecture, and guidebooks seldom forget it's picture when marketing the destination of Tallinn in the former Soviet Union. For a part of the population in Estonia, who belong to the Orthodox church of the Moscow patriarchate, it is the cathedral (bishop’s seat). Although Estonians would hardly think of demolishing it, it remains alien and hardly represent something considered to be Estonia’s own. 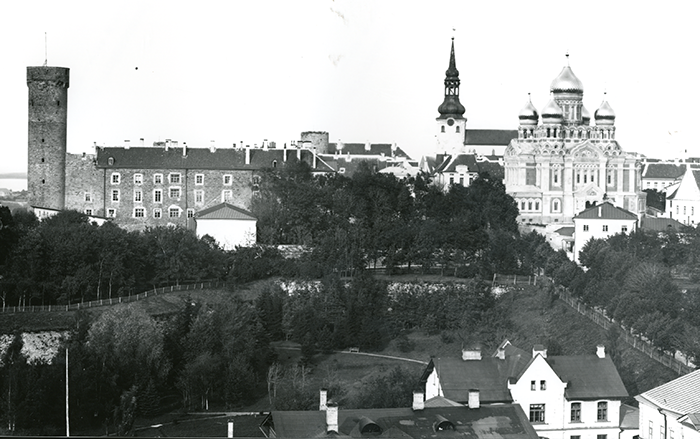 Sergei Wladimirowich Shakhovskoy was a Governor of the Estonian governorate between 1885 and 1894. In Baltic history, his name is connected with the reforms which aimed to modernise and synchronise the regions of the Russian Empire, i.e. russification. He also was the main initiator of the building of the Nevsky Cathedral. In this excerpt from his letter of fundraising, he summarises the arguments as to why Tallinn needs a new Russian Church.

You, Orthodox brothers, do not know the poverty that distinguishes our Tallinn churches. In every Russian city, large and small, the proper place for the Temple of God is allotted. For miles away, you can recognise the Russian city through the numerous domes of churches and monasteries, crowned with holy crosses, far away carries the sound of their bells. Who created these temples? Some were built by pious kings and boyars, others were founded by holy saints, others by unknown temple-builders, and they all stand for the glory of God, delight of the Orthodox heart, are decorated, supported and built by the diligence of the Orthodox people. Not so in Tallinn. Whether from the sea, from land, or from where you come, you will not recognise the Russian city: there are tall towers, many peaked beautiful bell towers, but these are all non-Orthodox, Lutheran churches. There is no Orthodox cross to be seen, nor to hear the Sunday ringing. Our churches are cramped, poor in decoration and so built among the philistine houses, as if they exist only out of their grace.

Karl Burman the Elder (1882-1965) was an architect trained in St Petersburg Art Academy. In the Estonian Republic, he was among the first to raise the question about the Estonian national architecture. He mainly designed Art Nouveau residential buildings, but in the Thirties also envisaged ambitious projects for the representative functions of the young republic. One of the earliest plans in this direction was a proposal to rebuild the Nevsky Cathedral into a Pantheon of Estonian Independence.

This church dominates the whole of Tallinn from Toompea, but without the sense of culture that is characteristic of Russia, this monument does not match harmoniously with the look of the old city, it is rather from another world. As a symbol of arrogance and violence, with its alien oriental variegated and noisy colour form, it is not only for German barons in their time, but also today for our independence a living reminder of former slavery, even though it was through the Russian influence that our people could breathe more freely.

The fate of the Church is now on the agenda. A bill to demolish the church is presented to the Parliament. A precedent was created in Warsaw, where the cathedral with the same purpose was demolished and the fate of the Russian cathedral in Kaunas is at stake. The question is whether or not the church should be torn down. But one thing is certain - from an architectonic point of view, it cannot be left in the present shape. Certainly the church site around it must also be re-organised. The square before the Toompea castle should gain the look of the Estonian forum and the Russian church should be rebuilt as a Pantheon of independence. 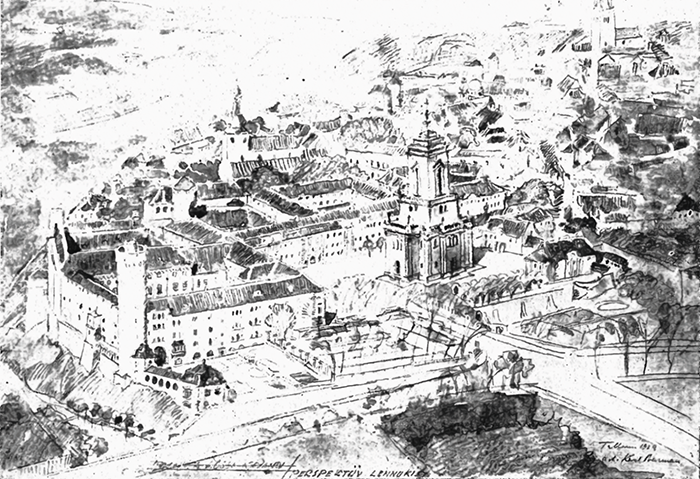