1.9 The Memorial Cross of Korsbetningen in Visby

The Danish King Valdemar IV Atterdag conquered Gotland in 1361. Thereafter, the island became part of the Danish kingdom for the next nearly 300 years. For a long time, this event shaped relations between Denmark and Sweden.


Valdemar IV landed on the southwest coast of the island on 22nd of July, 1361. On the following day, it came to multiple fights between Valdemar’s battled-tested soldiers and the rather poorly-armed Gutnish peasants. However, the Danish king was not to be stopped on his way to Visby. At the time, Visby was the only city on the island – strongly fortified and well-off due to its trade relations spanning the entire Baltic Sea region.


The 27th of July, 1361 was likely a hot summer day, as a gathered contingent of Gutnish peasants made a stand against the invading Danish troops before the city walls of Visby. The size of the armies was not recorded. It is estimated that the Gutnish could have mobilised between three and five thousand men, and Valdemar could have brought roughly 2,500 men to the island. 150–200 horses could have potentially been transported on the ships. Later sources number the death toll of peasants at the decisive battle of Visby at roughly 1,800. The city’s inhabitants appear not to have been involved in the battle and to have opened the city gates to the victorious Danish king after some negotiation. Valdemar IV remained with his troops in Gotland until the end of August and ravaged the rural community.


Valdemar began to use the title “King of the Gutnish” sporadically as part of his royal titles. Only in 1972, long after the island had become Swedish again, did Danish queen Margrethe II give up this title.


Since 1984, tens of thousands of tourists, history enthusiasts and reenactors of the Medeltidsveckan (Medieval Week) gather every summer on Gotland, and Visby takes on the appearance of a 14th century city. The taking of the city by Valdemar Atterdag was chosen as the focal event of the week in 1984, which illustrates how alive the memory of this event still was. Over the years, the Medeltidsveckan has evolved into one of the largest cultural events related to the Middle Ages in Europe. One of the high points of the 650th anniversary of the conquest of Gotland in 2011 was a reenactment of this dramatic battle for the Gutnish. This spectacle was repeated in 2013. The event was also not forgotten in Denmark.

Fig. 18: The Reenactment of the Battle before the Visby City Walls during the ''Medeltidsveckan'' 2011
Photo: Bo-Göran Kristoffersson, licence: Creative Commons Attribution‐Share Alike 3.0 Unported

In 1990, for her 50th birthday, Margrethe II of Denmark was gifted a series of eleven tapestries which were presented to her on her 60th birthday in the year 2000. These newly-made tapestries depict a modern interpretation of Danish history. The third tapestry shows the late Middle Ages. In the centre of the picture stands Valdemar Atterdag, who points to the abstracted city walls of Visby with his right hand. Without further assessment, the tapestry refers to the taking of the city.


See the presentation of the tapestries on the artist's homepage:

The Stone Cross of Korsbetningen

One of the most interesting sources for these events is located about 500 meters in front of the southeastern city wall of Visby. A memorial cross for the fallen Gutnish was erected in 1380. On the cross next to a depiction on Jesus Christ reads a Latin inscription:

– In the year of our Lord 1361, Tuesday after St James’ Day, Gutnish fell into the hands of the Danish before the gates of Visby. They are buried here. Pray for them!

The cross stands far from the tourist-saturated UNESCO World Heritage Site of the Visby old town. 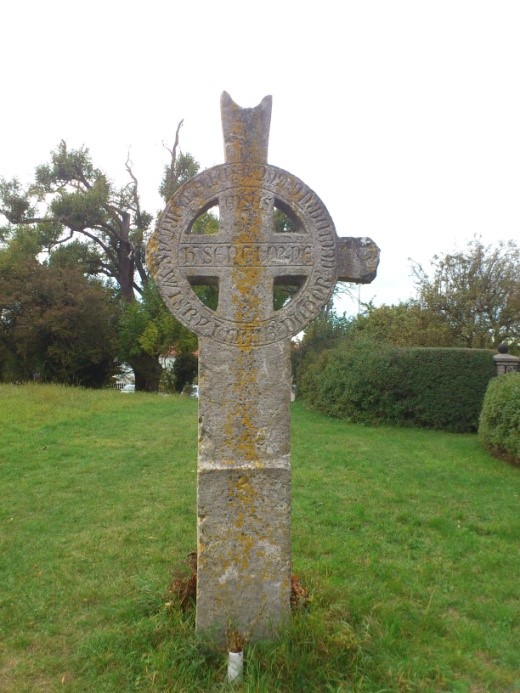 Only a few of the contemporary sources report on the battle at the city gates of Visby and the taking of the city and island by Valdemar Atterdag. Zealand chronicles from the 1360s report that Valdemar had to fight three large battles and took the island without great loss, whereas countless island residents lost their lives. The Lübeck chronicler Detmar reported in the 1380s that Valdemar was drawn to Gotland to take possession of the island’s resources. Both chronicles testify that Visby’s residents surrendered without a fight. In the second decade of the 15th century an unknown Franciscan monk completed his chronicles. Here we find the earliest detailed account of the events in the year 1361: Valdemar’s troops landed on Gotland on 22nd of July, and it came to a great battle before the southern city gates of Visby on 26th of July and 1,800 yeomen met their death. The king was able to take Visby through negotiations.

Chronicles of the 16th and 17th century

In the written sources of the 16th and 17th centuries Valdemar’s encounter with Visby was pushed to the foreground and the battle of the yeomen increasingly forgotten.


The Danish chronicler Arild Huitfeldt reported about 1600 that Valdemar declined to enter the city walls after the city surrendered. Rather, he arranged to knock a breach in the city walls. The king could have entered the city as a conqueror in this manner. Hans Nielssøn Strelow wrote in the first comprehensive chronicle of Gotland from the year 1633 on the plundering of Visby: He also mentions the slighting of the city walls. Valdemar further demanded that the three largest oil drums in the city be filled with gold and silver within three days.


Otherwise, he would deny the merchants in Denmark confirmation of their trading privileges. This was powerful leverage over the Visby merchants. Not surprisingly, Strelow reports the drums were filled with the city’s riches that same day. Both chroniclers highlight the relation between the Danish king and the citizens of Visby – the battle of the yeomen was no longer part of the common memory but had been superseded by the plundering of the city.


Whether the description in the chronicles is correct must be questioned. The fact is that, on 29th of July, Valdemar granted written confirmation of the privileges and various rights of the city. Whether this occurred alongside plundering of the city is not recorded in the contemporary documents.


The kings and dukes liked to extract high payments for the confirmation of privileges also in other trade cities. And the Franciscan monk from Visby did report that Valdemar IV left the island after a month and took with him riches from the city and the land. Therefore, we can assume that the citizens of Visby also had to pay their tribute after the conquest.

The Swedish artist Carl Gustaf Hellqvist put the descriptions of the conquest of Visby which had been passed down into a large-scale scene in 1882. It remains today the best-known portrayal of the events of 1361 and is often found in Swedish school books. In the 2 x 3.3 meter-large painting, one sees the market square of Visby. Valdemar IV sits on the right side on a wooden throne surrounded by knights (Danish troops appear in the background) and watches as Visby’s citizens fill three large drums with riches. So the picture references the chronicle of Hans Nielssøn Strelow.


In doing so, the implementation originates in the furthest fantasies of the artist. The title of the painting refers to the citizens of Visby having to fulfil this requirement to prevent the full plundering and destruction of their city. Strelow and Hellqvist both portray the citizens of Visby as the actual victims of the conquest by Valdemar Atterdag. Over the centuries, the memory of the suffering of the city’s inhabitants lives on above all – reality and myth are interwoven into an impervious thicket. These events were propagated among the Swedish public in the 19th century through various popular history books. Gotland was portrayed as a part of Sweden with a special and long history. 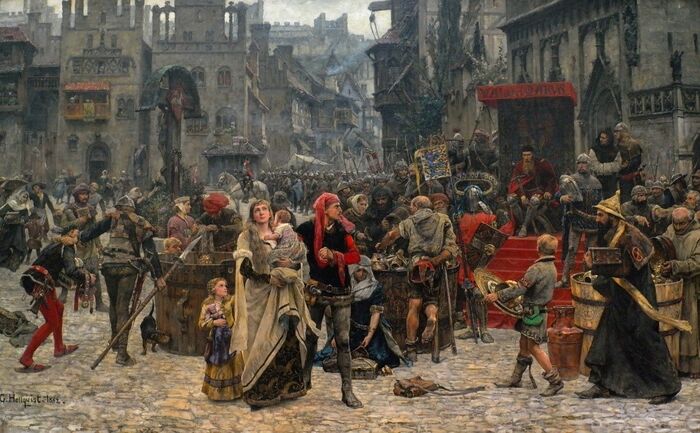 Archaeological excavations at the beginning of the 20th century

Late Medieval reports on troop strength and victim counts are often exaggerated. Archaeological excavations at the beginning of the 20th century show, however, that a late-Medieval massacre did in fact take place before the city walls of Visby. As early as the beginning of the 19th century, human remains began appearing in the area around the memorial cross. Some of these were dressed in strongly-weathered chainmail hoods and plate armour. Beginning in 1905, extensive excavations were undertaken by archaeologist Oscar Wennerstein. Subsequently, over 300 skeletons emerged that showed clear war injuries. This discovery awoke great international interest – even the German Emperor Wilhelm II visited the excavations at the end of July 1905.


By 1930, further excavations identified three mass graves with a total of 1,200 skeletons. From this, the estimation of 1,800 victims seems entirely plausible. The discoveries were a sensation and advanced the popular image of the events as correct. The sacrifice of blood in the conquest was carried above all by the population of the rural communities.


The excavations brought to light a variety of unique finds that can be dated almost to the exact date thanks to the Battle of Visby – a panorama of a late-Medieval battle lay at the feet of researchers. International interest did not subside because the findings also illustrate the common arms in the late medieval Baltic Sea area. The finds are located today in the regional museum of Gotland, Gotlands Fornsal, and in the historical museum in Stockholm, Historiska Museet. 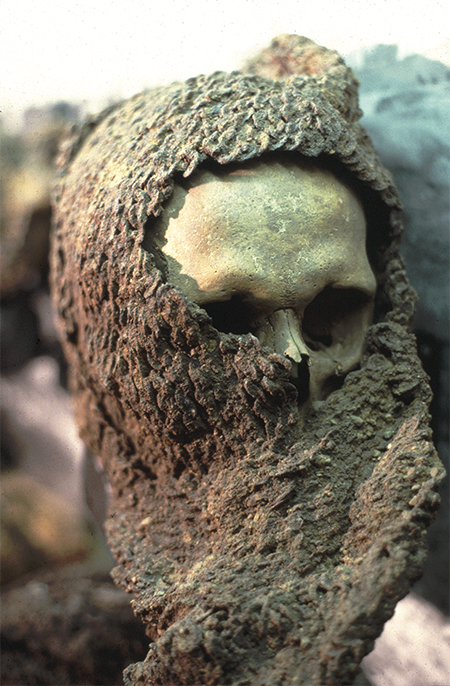 Fig. 21: Human skull with a chainmail hood
Find of the excavation campaign in 1928 in mass grave
Photo: Sven Rosborn, https://sv.wikipedia.org/wiki/Fil:Korsbetningsskelett.jpg

Over the centuries, the focus shifted from the yeomen to the citizens of Visby and then again back to the defeat of the Gutnish peasants. The stone cross of Korsbetningen bears witness to an early beginning of remembrance on the island for the victims of the battle. However, we should also remember that, near the village Mästerby, another stone cross was erected on Gotland around the same time, one which represents another battle of the yeoman with the Danish army on Valdemar Atterdag’s way towards Visby.


Due to the numerous archaeological findings around both stone crosses, we got a very detailed insight in a military campaign of the late medieval period in the Baltic Sea area.


The conquest of Gotland in 1361 is still present in Sweden as well as Denmark. However, it is no longer about glorifying each separate history, as in previous centuries, but rather it is a neutral reflection on this shared history.


In recent years, an array of exhibits and television documentaries has brought these events to the wider public. Especially in Sweden, this historic episode has received much attention. In 2011, the museum Gotlands Fornsal opened its own exhibit report on the conquest of Gotland in 1361. In Historiska Museet, a report of the permanent exhibit has been dedicated to this topic since March 2014. Under the title Massakern vid muren – slaget om Gotland 1361 (The Massacre at the Wall – The Battle for Gotland 1361) the campaign of Valdemar Atterdag is illuminated from political, economic and cultural historical perspectives. Examinations of the skeletons were able to show that Danish and Gutnish victims were buried alongside each other - the exhibit shows victims of both sides.


Since 2014, the refurbished museum in the Danish city Vordingborg has illustrated the history of power in Denmark's Middle Ages especially well. The conquest of Valdemar Atterdag is also included, with skeletons found during the excavations in Visby on display. Thematically, these objects are part of the section War in the Middle Ages. The selection of artefacts illustrates the connection between the Scandinavian countries, whose roots are to be sought in the distant past.