During the early modern period, the Baltic Sea became surrounded by the growing Swedish empire. The military and administrative changes made it possible for the Nordic and distant Sweden to become a power player in European affairs. One of the rulers associated with Swedish success is Gustav II Adolph (1594–1632). His military reforms helped Sweden to become a military power during the European Thirty Years’ War and he is sometimes referred to as one of the greatest military commanders of all time or “The Lion of the North”.


Gustav II Adolph and his successors and advisors implemented several reforms concerning civil service. The University of Uppsala was reformed and new universities in Tartu (1632), Åbo/Turku (1640) and Lund (1666) were founded during the 17th century in addition to other institutions of education such as the “Gymnasium” (secondary school) in Tallinn in 1631. The aims of the Swedish rulers to raise the level of education among the common people culminated with the development of a network of peasant schools. In (later part of) the 17th century, Sweden was known as the stronghold of Lutheranism, thus in education it strove to take care of the nation’s religious education as well as the unity of the Lutheran Church in all of its dominions. In the Baltic provinces, Sweden’s church and education policy encouraged the development of Estonian and Latvian orthography and grammar.


All this led to a varied reception of Swedish power in the 17th century. In Estonian historiography and national consciousness, for example, this period became known as the “good old Swedish time” in contrast to the tsarist rule from the 18th century with a large autonomy for the German-Baltic nobility. The reception is much more varied in Germany as sources show and differs greatly from the viewpoint of Poland-Lithuania, where the Polish-Swedish war of 1655–1660 is called the “deluge” due to massive devastations it caused.


In Sweden, Gustav Adolph is mainly seen as a warrior king, but he should be remembered also as a benefactor of universities, for example as the true founder of Uppsala University Library. The books were to a large extent booty of war. Polish scholars are publishing catalogues of books held in Uppsala University Library that once belonged to libraries in what is today Poland.


Gustav Adolph is also remembered as the founder of a number of cities and towns, including Gothenburg in Sweden and Nystad/Uusikaupunki in Finland. A special cake is eaten on the day of his death,6th of November.

Gustav Adolph conquered Riga in 1621, an episode in the recurrent Polish-Swedish wars of the seventeenth century. A much later historicist stained glass window in Riga Cathedral, made in 1884, commemorates this. Here, children greet the conqueror of Riga, hailed as the champion of Protestantism – note the Bible in the hand of the clergyman – with flowers as he enters the cathedral. 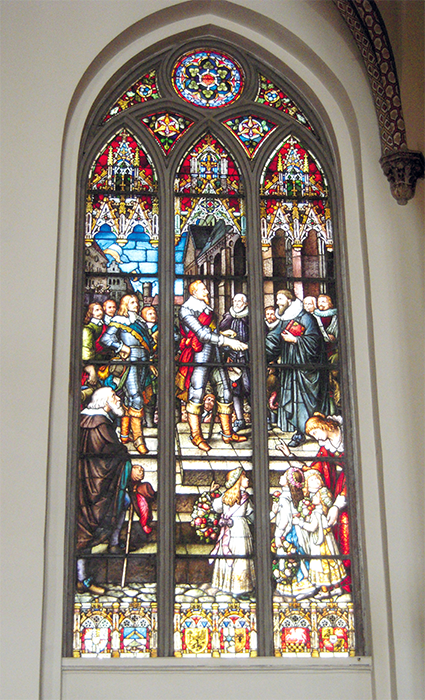 Lullaby “The Swedes came”
There are two children’s songs that give an interesting view of the Swedish participation in Thirty Years’ War.

The Swedes have come
Took everything with them
Have kicked in the windows
Have taken away the lead
Have made it into bullets
And shot all the peasants.
- Macht auf das Tor – Alte deutsche Kinderlieder. Ed by von Maria Kühn. Königstein im Taunus, 1905.

This is another similar lullaby that scares children to sleep with the Swedish forces coming. Axel Oxenstierna (1583-1654) was counselor to the king Gustav II Adolph and Queen Christina and had an important role in the war.

The Thirty Years’ War was an important topic in the poetry written at the Academia Gustaviana in Tartu. The poets saw the war as a vice but glorified Gustav II Adolph as brave general and heroic winner. An excerpt from a poem by Georg Stiernhielm, a Swedish official, poet and scholar in Tartu.

/--/
O Swede, our virtues were laughed at as barbarous

And our Erudition a trifle by the
German, French, Italian
And the flagrant Spaniard;
And thought it well to call
A Swede shamefully simple.

Now, however, (what a wonderful change!)

Look the German, French, Italian
And the flagrant Spaniard
And the world – petrify
With your beauty and elegance.
They honour and revere,
Swedes, you educated nation,
Your warfare and your muses.
But whence came the change?

Where else but the God gives

The nation a fine leader;
He blessed enriches
Us with happiness.
GUSTAV, high hero,
Majestic and wise,
God-fearing he triumphs

In virtue, war and education,

Able, powerful, beautiful,
It is him who

Stands for his nation

And its happiness
In thankful splendour.
/--/ 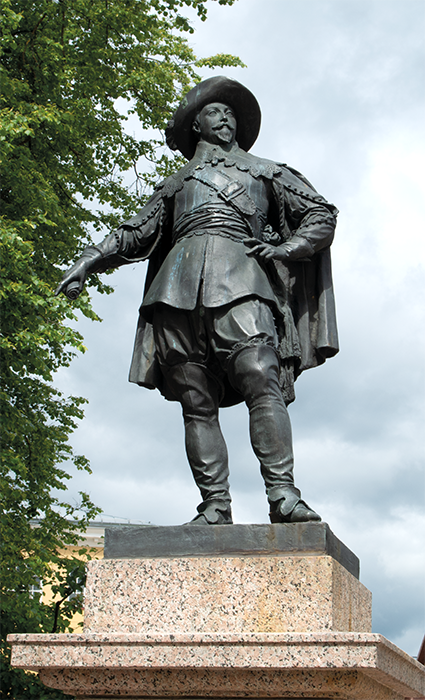 Fig. 34: Statue of Gustav II Adolph
behind the main building of the University of Tartu
Photo: Janet Laidla

The statue was inaugurated in 1928 for the 10th anniversary of the independence of the Estonian republic and in anticipation of the 300-year anniversary of the founding of the university. During the Soviet period, the statue was taken down and destroyed (a spur from a boot survives and is kept at the University of Tartu Museum). A new statue was erected in 1992.